This past summer I travelled to the beautiful island of Sri Lanka, as did my dad – over 30 years ago. I embarked on a journey looking for the trails of my father, and found his long-lost friend Siri.

When I arrive in Hikkaduwa, towards the end of my travels in Sri Lanka, I have only one thought on my mind: finding Siri. My dad came to Sri Lanka 30 years ago in the 1980’s, on three different holidays and always stayed with a guesthouse owner called Siri.

Before leaving, my dad told me about the evenings that he spent together with Siri and other visitors. He also spoke to me about the lovely porch overlooking the beach close to the ocean, and the good Sri Lankan food of Siri’s sister Dana. I was keen to see, if it all was still the same.

With those stories on my mind, a few photos from 30 years ago in my pocket and a vague address, I approach a Tuktuk-driver at the bus station of Hikkaduwa, when I arrive.  “Do you know Siri’s guesthouse?”, I ask.

My hopes are immediately crushed, when he replies “no”. Hikkaduwa’s town centre is not very big and I had assumed people know each other. Yet, he is willing to take a look at the address that I had written down. My dad had not been in touch with Siri anymore after he had been there 30 years ago. However, he still had an address. Through some friends, who went back to visit a few years after the tsunami hit Sri Lanka in 2004, he heard that Siri was alive. Yet, ever since he didn’t get any news and vainly tried to get in touch with him over the internet.

The Tuktuk-driver at least knew the address and told me to jump in. Driving through some tiny back roads of the village, we finally stop to ask some locals. The Tuktuk-driver takes my notes and pictures and points them towards an old man and his children. They seem to recognize Siri. In Singhalese we get some directions. The drive continues and after a few minutes we are standing in front of a small restaurant. “Isira’s coffee shop”. Oh no! They must have misunderstood me, was my first thought. This is not the right name and my dad never mentioned a coffee shop or restaurant.

Then I get out of the Tuktuk and a half-bald smiling man approaches me. “Are you Siri?”, I ask him. – “Yes”, he replies. I can’t believe it!! I ask him: “Do you remember Axel?” And to my surprise, he answers without any moment of hesitation: “Yes”. I can see that he looks somewhat puzzled and I take out the pictures from my bag that my dad took 30 years ago. 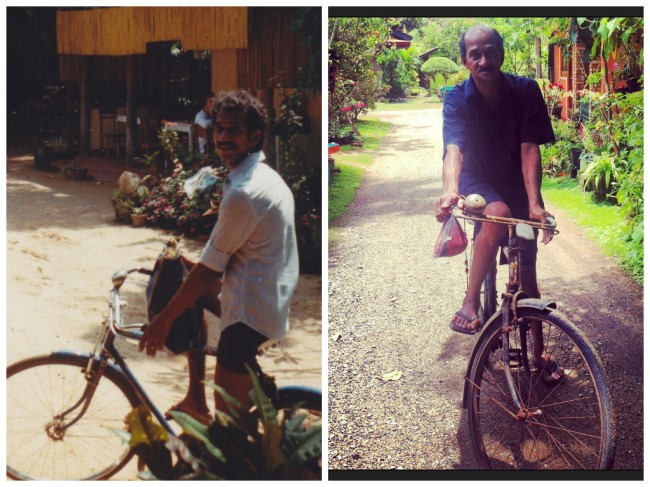 Siri holds the pictures in his hands, showing himself, his parents, sister and my dad – all over three decades ago. I could see that he was somewhat moved and can only imagine what he must have felt. I tell him that I am Axel’s daughter and am not sure if he understands. He is too focused on looking at the pictures. A young man – his son – is standing next to him, looking equally interested at the pictures. As Siri told me later the picture of his parents that I showed him is the only one he has got now. All the other memories were washed away in the tsunami nine years ago.

Siri does not look much like the young man on the pictures anymore. 30 years of time have left their traces. His head is half-bald and carries a big belly in front of him. However, the kind smile from the pictures still seems to be the same.

Siri offers me and my friend a room. He leads us to his little guesthouse, not far from the restaurant. I instantly recognise the porch from the pictures. My dad was sitting right here – 30 years ago. It is an astonishing and yet unreal feeling. Travelling half around the world and meeting the same person my dad met in the 1980’s. The building still looks the same, survived a big tsunami.

The same evening we sat down to talk a bit with Siri. In the 1980’s my dad visited Sri Lanka three times. He had many memories that he shared with me, and a lot of travel advice that he gave me beforehand. Of course, a country like Sri Lanka, especially after the end of the 30-years-long civil war, changes quickly. But it is somewhat remarkable that even after thirty years, and without any contact, this man that saw hundreds of tourists come and go, still remembered my dad. We later then called my dad over my phone and they both spoke for several minutes on the phone. Siri was holding his head into his hand. He was deeply moved.

When Siri showed me the guestbook entry that my dad had left 30 years ago, I felt a shiver going down my spine. The address still said “West-Germany” and it was dated 10th March 1982 – his first visit to Sri Lanka. Siri said it was one of the only guestbooks that survived the tsunami. What an incredible finding!

Back at home, I showed my dad the pictures and he was surprised by how much the little village of Hikkaduwa had changed. Back in the day it was a hippie spot, surfers and backpackers from all over the world came here. The more adventurous breach settled down in this small Asian country. Now there is a big hotel wall directly facing the beach. It actually helped holding the big waves away, when the tsunami struck Sri Lanka on 26th December 2004. Only because of those massive buildings – that are now blocking the wonderful view from Siri’s guesthouse to the beach – Siri and his family survived.

After all, it is a weird feeling what travelling can sometimes give you. Going back in time is one of the things. 30 years is a long time for me. Being 26, it is more than my whole life. I begin to wonder, how much the places that I visited have already changed. Will I tell my children any interesting stories about my travels in 30 years from now when they go to the same places I have been to? Will they meet the same people I have met? See the same ruins, temples, waterfalls and mountains as I did? Will it still look the same then?

4 thoughts on “On the trail of Siri in Sri Lanka”